This game has 1 reported Temporal Dark Patterns. There are 14 votes indicating the absense of a dark pattern.

This game has 0 reported Monetary Dark Patterns. There are 33 votes indicating the absense of a dark pattern.


3 votes
Pay to Win -
0 / 3 votes
A player can spend real money to purchase something that gives them an advantage in the game.


3 votes
Accidental Purchases -
0 / 3 votes
Making it easy to accidentally spend money with no confirmation or ability to undo or refund the action.


3 votes
Recurring Fee -
0 / 3 votes
Encourages players to play as much as possible to get their money's worth.


3 votes
Anchoring Tricks -
0 / 3 votes
Placing a cheap item next to an expensive item to make it look more affordable.

This game has 0 reported Social Dark Patterns. There are 21 votes indicating the absense of a dark pattern.


3 votes
Social Pyramid Scheme -
0 / 3 votes
You get a bonus for inviting your friends and then they have to invite their friends.


3 votes
Social Obligation / Guilds -
0 / 3 votes
To avoid letting down your friends, you are obligated to play when you don't want to.


3 votes
Encourages Anti-Social Behavior -
0 / 3 votes
The game incentivizes players to lie, cheat, or backstab other players to get ahead.


3 votes
Fear of Missing Out -
0 / 3 votes
If you stop playing you'll miss out on something or be left behind and unable to catch up.


3 votes
Competition -
0 / 3 votes
The game makes you compete against other players.

This game has 0 reported Psychological Dark Patterns. There are 21 votes indicating the absense of a dark pattern.


3 votes
Invested / Endowed Value -
0 / 3 votes
Having already spent time and money to improve your status in the game, it's difficult to throw it away.


3 votes
Badges / Endowed Progress -
0 / 3 votes
Reluctancy to abandon a partially completed goal, even one forced upon the player.


3 votes
Complete the Collection -
0 / 3 votes
The urge to collect all the items, achievements or secrets in a game.


3 votes
Illusion of Control -
0 / 3 votes
The game cheats or hides information to make you think you're better than you actually are.


3 votes
Optimism and Frequency Biases -
0 / 3 votes
Overestimating the frequency of something because we’ve seen it recently or memorably. 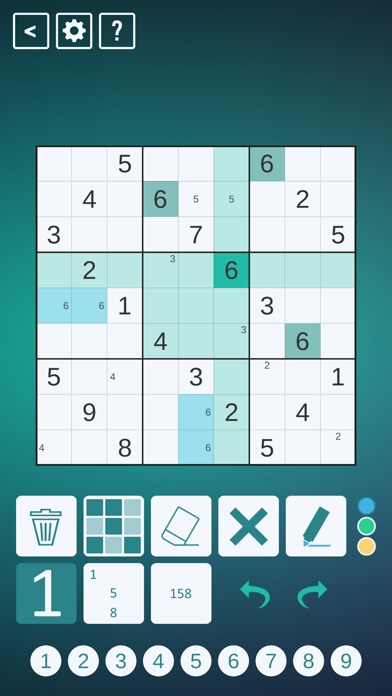 Presented by Cracking The Cryptic, YouTube's most popular Sudoku channel, this is the brand new “Classic Sudoku” game that their viewers have been requesting for the last two years!

Simon Anthony and Mark Goodliffe, the hosts of Cracking The Cryptic, have assembled a most extraordinary collection of sudoku puzzles. The sudokus in the game cover a wide range of difficulty with something for everyone - and also require an incredible range of techniques to solve them efficiently! Each of these special puzzles had to qualify for inclusion in the game by passing our rigorous play-testing - a test that NO other sudoku game on the market would pass. This play-testing ensures that a human being has actually thought about the journey you, the solver, will go on as you work through the puzzle. No computer testing here!

Indeed our more advanced puzzles have been carefully designed to showcase some of the diabolical techniques in an intuitive way with the aim of helping solvers UNDERSTAND the patterns involved.

In Cracking The Cryptic’s games, players start with zero stars and earn stars by solving puzzles. The more puzzles you solve, the more stars you earn and the more puzzles you get to play. Only the most dedicated (and cleverest) sudoku players will finish all the puzzles!

Featured authors include (obviously) Simon and Mark but also some other authors who have produced popular puzzles on the channel!

Mark and Simon have both represented the UK many times in the World Sudoku Championship and you can find more of their puzzles (and lots of others) on the internet’s biggest sudoku channel, Cracking The Cryptic.

Features:
40 beautiful puzzles on launch
5 new levels every month for the first year (a total of 100 levels!)
Hints written by Mark and Simon!