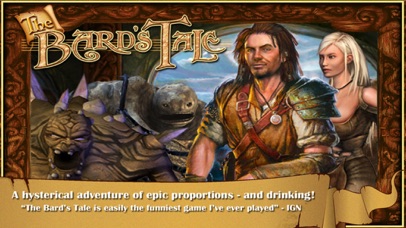 They said it couldn’t be done… a full-scale massive 3D epic role-playing game on iOS! See why it’s the BIGGEST iOS game ever made!

“The Bard’s Tale is easily the funniest game I’ve ever played, and I’ve played all the funny games out there.” – IGN

You are the Bard, a selfish rogue weary of pointless sub-quests and rat-infested cellars. Through magical song you summon characters to join your quest for coin and cleavage!

“Ready your weapon and bladder as you embark on this ridiculously addicting quest and the funniest adventure of the year, The Bard’s Tale” – Game Chronicles

Prepare to immerse yourself in over 20-30 hours of adventure, featuring:

• 50 enemy types (not counting bosses!)
• A vast world to explore with towns, wild forests, rivers, castles, towers, secret dungeons, snowy mountains, caverns, haunted tombs and more
• A full cast of bizarre NPC’s
• Over a dozen special boss enemies to defeat
• 16 magical characters to discover and then summon at will to aid you
• Over 150 unique items of weaponry, armor, instruments, tokens, artifacts and loot!
• More Song & Dance numbers than any other game, including a zombie dance-off!
• Over 14 hours of outstanding voice-acting from top Hollywood talent, including Cary Elwes (The Princess Bride) as the Bard, and the inimitable Tony Jay as the Narrator

But wait! That’s not all! Enjoy these great new additions in the iOS version:

New Features:
• Leaderboards—for accumulated Silver and Experience!
• Achievements—over 50 spread throughout the game!
• Autosave—option to save automatically when you near a save-book in game.
• iCloud Saves—option to save to iCloud, enables sharing saves across your iOS devices.
• Time-Savers—optional in-app purchases are available to pump up your Bard and save you time! (Note: All such items are attainable through normal game-play, with time and persistence, just as in the original console release.)
• Classics Games—includes original classic games The Bard’s Tale 1, 2 & 3.
• Supports 60beat® GamePad.


Universal App with Adaptive Rendering:
For a single low price, play on all your compatible* devices! The Bard’s Tale takes full advantage of your hardware to maximize your experience--including HD resolution and 60Hz video refresh on capable devices.** iOS adaptation by Square One Games.

“This game is satire in its sharpest form” – Cheat Code Central

Support:
We are committed to improvement. Please send support requests through The Bard’s Tale Support link below.

IT IS HUGE!
Please note: Installation over Wi-Fi can temporarily require as much as 3.4GB of free space on your device.