This game has 20 reported Temporal Dark Patterns. There are 1 votes indicating the absense of a dark pattern.


3 votes
Playing by Appointment -
3 / 0 votes
Being forced to play according to the game's schedule instead of yours.


3 votes
Daily Rewards -
3 / 0 votes
Encourages return visits every day and punishes you for missing a day.


3 votes
Grinding -
3 / 0 votes
Being required to perform repetitive and tedious tasks to advance.


3 votes
Advertisements -
3 / 0 votes
Forced to watch ads or given rewards for watching ads.


3 votes
Can't Pause or Save -
3 / 0 votes
The game does not allow you to stop playing whenever you want.


3 votes
Wait To Play -
3 / 0 votes
In-game timers that make you arbitrarily wait for something.

This game has 33 reported Monetary Dark Patterns. There are 0 votes indicating the absense of a dark pattern.


3 votes
Pay to Win -
3 / 0 votes
A player can spend real money to purchase something that gives them an advantage in the game.


3 votes
Accidental Purchases -
3 / 0 votes
Making it easy to accidentally spend money with no confirmation or ability to undo or refund the action.


3 votes
Recurring Fee -
3 / 0 votes
Encourages players to play as much as possible to get their money's worth.


3 votes
Anchoring Tricks -
3 / 0 votes
Placing a cheap item next to an expensive item to make it look more affordable.

This game has 19 reported Social Dark Patterns. There are 2 votes indicating the absense of a dark pattern.


3 votes
Social Pyramid Scheme -
3 / 0 votes
You get a bonus for inviting your friends and then they have to invite their friends.


3 votes
Social Obligation / Guilds -
3 / 0 votes
To avoid letting down your friends, you are obligated to play when you don't want to.


3 votes
Encourages Anti-Social Behavior -
3 / 0 votes
The game incentivizes players to lie, cheat, or backstab other players to get ahead.


3 votes
Fear of Missing Out -
3 / 0 votes
If you stop playing you'll miss out on something or be left behind and unable to catch up.


3 votes
Competition -
3 / 0 votes
The game makes you compete against other players.

This game has 21 reported Psychological Dark Patterns. There are 0 votes indicating the absense of a dark pattern.


3 votes
Invested / Endowed Value -
3 / 0 votes
Having already spent time and money to improve your status in the game, it's difficult to throw it away.


3 votes
Badges / Endowed Progress -
3 / 0 votes
Reluctancy to abandon a partially completed goal, even one forced upon the player.


3 votes
Complete the Collection -
3 / 0 votes
The urge to collect all the items, achievements or secrets in a game.


3 votes
Illusion of Control -
3 / 0 votes
The game cheats or hides information to make you think you're better than you actually are.


3 votes
Optimism and Frequency Biases -
3 / 0 votes
Overestimating the frequency of something because we’ve seen it recently or memorably.

There is a monthly club that does not help you that much. It does cost around 25 bucks though.

They removed your losses about a year ago. You can redeem friend losses in your faction.

Every tourney is a competition.

Wars especially mean you have to blankly stare at your screen for a 48 hour window. Some factions have shifts you have to play so that enough people sign up.

There is a lot of trash in loot boxes.

You can only carry so many characters. To carry more you have to pay.

From end of stages or end of war matches.

Yeah. Until you lose. Then you think they cheated or you need to spend more.

If you want to get characters to compete, the only option is to pay. 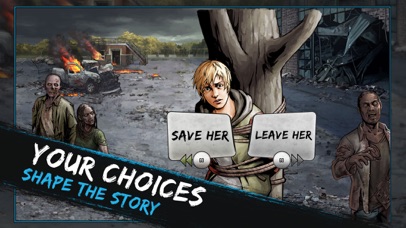 The Walking Dead: Road to Survival is the official strategy RPG game of The Walking Dead. Join Rick, Michonne and other iconic Walking Dead characters and build your ultimate team of survivors as you battle through the zombie apocalypse.

The Walking Dead: Road to Survival is the definitive zombie strategy RPG game, brought to you by Robert Kirkman, creator of The Walking Dead comic series.

Fight for survival against walkers and humans alike and use strategy against enemies in this adventure RPG. Build a town to keep the walkers at bay, but be warned – the horrors that lurk outside aren’t the only threat.

Based on an all-new story from award-winning Walking Dead writer Jay Bonansinga. Make uncompromising decisions and develop your survival strategy.

Alliances and PvP RPG gameplay
• Raid enemies: Choose you battle strategy to raid enemy players for their resources
• Factions: Forge an alliance with other players to help each other through battles
• Territories: You and your Faction fight to claim and hold valuable land and resources by enemies
• All Out War: Face off against other Factions around the world in the ultimate limited time events

Upgrade Your Survivors
• Level up and customize Survivors to enhance their weapons and skills
• RPG progression makes your Survivors stronger to cut down more walkers
• Collect new Survivors from The Walking Dead universe, each with their own specialized battle strategy

Build your Base & Expand into the Wasteland
• Build and maintain your community of houses to hold Survivors, a Town Hall, a Workshop and more

Battle in Iconic The Walking Dead Locations
• Fight alongside your faction for control of well-known areas
• Battle, conquer and defend locations like Alexandria, Woodbury, Sanctuary and more

Walkers tear at your city walls while desperate Survivors rip apart the town’s foundations from the inside. When the time comes to fight, what will you choose?