This game has 12 reported Temporal Dark Patterns. There are 2 votes indicating the absense of a dark pattern.

This game has 18 reported Monetary Dark Patterns. There are 4 votes indicating the absense of a dark pattern.


1 votes
1 votes
Accidental Purchases -
1 / 1 votes
Making it easy to accidentally spend money with no confirmation or ability to undo or refund the action.

This game has 11 reported Social Dark Patterns. There are 3 votes indicating the absense of a dark pattern.


2 votes
Social Pyramid Scheme -
2 / 0 votes
You get a bonus for inviting your friends and then they have to invite their friends.


1 votes
1 votes
Encourages Anti-Social Behavior -
1 / 1 votes
The game incentivizes players to lie, cheat, or backstab other players to get ahead.

This game has 13 reported Psychological Dark Patterns. There are 1 votes indicating the absense of a dark pattern.


1 votes
1 votes
Illusion of Control -
1 / 1 votes
The game cheats or hides information to make you think you're better than you actually are.

Playing by Appointment reported on May 29, 2022

Events are time based and only open on certain days 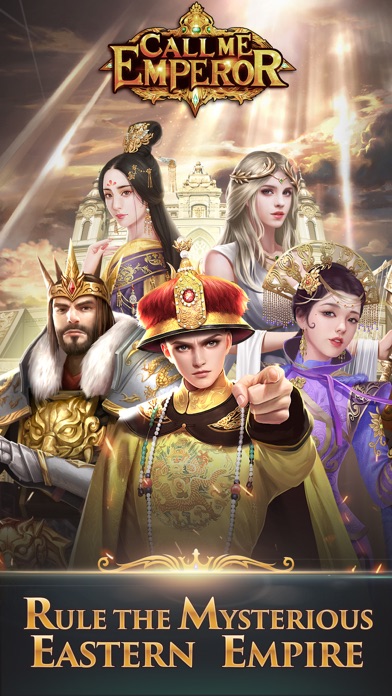 What is the life an emperor? Is it a life of power, luxury or a life full of enticing beauties? Finally, Updated with New themes，The most trending Role playing game (RPG) that everyone in this world is playing (Call me Emperor) has officially been launched.
Experience life in the mysterious Eastern Empire, become the most powerful and famous Emperor across the entire Chinese dynasty. Surround yourself with enticing beauties across the globe and experience more oriental features and fun in this game. The beginning of a new era has just begun! Join millions of player worldwide and fight epic battles. build the most powerful dynasty of all times and to lead your empire to the golden age!

Game features:
Experience the mysterious life of a Chinese Emperor
In this game, you will become a mighty and famous The Eastern Emperor! You can marry belles from all over the world and forge diplomatic ties with many countries. Meticulously raise your offsprings to become great heirs. Train your army, crush your enemies in battles, build a magnificent empire and become a mighty emperor !

Recruit famous superheroes worldwide to become your council of Ministers
Columbus, Caesar, King Arthur and many other medieval superheroes are all available in this game. These superheroes will become your ministers and under your wise leadership, you shall rise to greatness!

Disguise yourself and enjoy life outside your palace
Disguise yourself by changing into casual clothes. You can decide where to go by simply dicing out numbers. By traveling around the world, you can also meet up with enticing beauties across the globe.

Royal marriages and Extended social interactions
When your children grow up, you can find marriage partners for them throughout the world channel. You can also marry from the royal homes of other players and communicate with them anytime anywhere.

Epic Alliance Battles
Fight epic battles with millions of players worldwide and work out strategies together. Attacking or defending during alliance battle will all count to your victory.

Open up Schools and enhance your Skills
Regardless of age, you can still send your ministers to school for further studies. After they finish their studies, their skills will improve.

Rewrite your own Empire story, uncover a new chapter now !