This game has 38 reported Temporal Dark Patterns. There are 9 votes indicating the absense of a dark pattern.


6 votes
1 votes
Playing by Appointment -
6 / 1 votes
Being forced to play according to the game's schedule instead of yours.


6 votes
1 votes
Wait To Play -
6 / 1 votes
In-game timers that make you arbitrarily wait for something.


5 votes
2 votes
Can't Pause or Save -
5 / 2 votes
The game does not allow you to stop playing whenever you want.

This game has 52 reported Monetary Dark Patterns. There are 19 votes indicating the absense of a dark pattern.


6 votes
1 votes
Pay to Win -
6 / 1 votes
A player can spend real money to purchase something that gives them an advantage in the game.


5 votes
1 votes
Recurring Fee -
5 / 1 votes
Encourages players to play as much as possible to get their money's worth.


4 votes
2 votes
Accidental Purchases -
4 / 2 votes
Making it easy to accidentally spend money with no confirmation or ability to undo or refund the action.


5 votes
2 votes
Anchoring Tricks -
5 / 2 votes
Placing a cheap item next to an expensive item to make it look more affordable.

This game has 34 reported Social Dark Patterns. There are 12 votes indicating the absense of a dark pattern.


6 votes
1 votes
Social Obligation / Guilds -
6 / 1 votes
To avoid letting down your friends, you are obligated to play when you don't want to.


6 votes
1 votes
Fear of Missing Out -
6 / 1 votes
If you stop playing you'll miss out on something or be left behind and unable to catch up.


6 votes
1 votes
Competition -
6 / 1 votes
The game makes you compete against other players.


5 votes
2 votes
Social Pyramid Scheme -
5 / 2 votes
You get a bonus for inviting your friends and then they have to invite their friends.


4 votes
2 votes
Encourages Anti-Social Behavior -
4 / 2 votes
The game incentivizes players to lie, cheat, or backstab other players to get ahead.

This game has 31 reported Psychological Dark Patterns. There are 15 votes indicating the absense of a dark pattern.


5 votes
1 votes
Optimism and Frequency Biases -
5 / 1 votes
Overestimating the frequency of something because we’ve seen it recently or memorably.


5 votes
2 votes
Invested / Endowed Value -
5 / 2 votes
Having already spent time and money to improve your status in the game, it's difficult to throw it away.


4 votes
2 votes
Badges / Endowed Progress -
4 / 2 votes
Reluctancy to abandon a partially completed goal, even one forced upon the player.


5 votes
2 votes
Illusion of Control -
5 / 2 votes
The game cheats or hides information to make you think you're better than you actually are.


3 votes
4 votes
Complete the Collection -
3 / 4 votes
The urge to collect all the items, achievements or secrets in a game.

huge rewards for inviting others to play

apart from addition, guilds are the biggest cause for players to keep coming back. if you dont do good in guild events, you'll most likely be kicked out depending on how guild leader is feeling that day

Playing by Appointment reported on Aug 4, 2022

when the sheild runs out. you have to log back in or risk losing a HUGE amount of progress

just look at The Mall

it's everywhere. you can go to any place in game and there'd something like that or redirects to that

yes that problem has been plaguing this game since ages ago 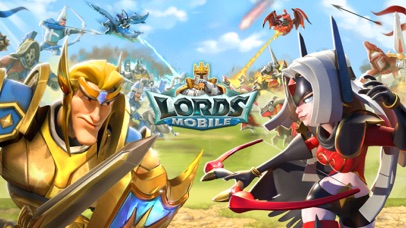 The empire is no more. Peace has been shattered by the ambition and greed of Lords seeking power. The world has split into factions and Guilds. Monsters and Darknests are appearing more frequently. A war is starting, and the time for powerful heroes has come...

Restore the balance of power by creating the biggest empire ever! Recruit heroes, forge alliances, conquer and expand your territory, win epic battles, and become the world's greatest warlord in this strategy RPG! A new world order is needed to re-establish peace!

Explore LORDS MOBILE, a magical world thrown into war and chaos by terrifying monsters and powerful enemies. Choose your favorite hero, recruit troops, and fight and conquer fearlessly in a war of epic dimensions!

An Open-World RPG Multiplayer Game: Build and Conquer to Create a Mighty Empire
Explore, conquer, and clash in the arena with other players in this MMO! Join a guild and play with millions of players in an open world, on mobile!

Defend your Territory
Secure your troops and heroes, survive against opponents, and defend your empire's castle at all costs. A perfect war strategy requires an invulnerable defense!

Find Friends
Fight and counterattack with your kingdom's army allies, and ride into war together as a guild against enemies in an endless fantasy MMORPG!

Rule as the Emperor
Claim the throne in a MMO battle royale for the kingdom! Will your legacy as a conqueror be just or cruel?

Powerful Heroes
Recruit and upgrade heroes with unique skills for the arena! Let them lead, attack, and conquer your enemies, or group them into teams to complete an RPG-style campaign!

Master Your War Strategy
Plan your tactics for the clash! Plan your troop lineups, perfect your strategy, and counterattack! Discover the best way to defeat enemies!

Epic Multiplayer Battles: Different Types of Troops
Lead your warriors and soldiers in war! Carefully choose your troop types before going into battle: infantry, ranged, cavalry, siege, or a mix!

Switch Kingdoms
Establish your empire on new lands by moving to any server with a simple tap in this combat MMORPG!

Choose Your Battle Path: Fight or Trade
Create an economic empire based on trade, treasures, and alliances with friends, or become an offensive player and conquer enemy kingdoms! Will you liberate prisoners of war? Or will your army and kingdom crumble to dust? It’s all about planning your tactics and strategy! No kingdom can stand in your way!

Wage war with your allies in LORDS MOBILE. Attack and conquer enemy territories, plan your combat strategy, and build a great empire. Fight against legendary monsters and warriors!

Your kingdom awaits. Are you ready for a showdown?

Players will get the following subscription exclusive privileges:

Players will be able to claim the following items over a period of 7 days:

Please note:
● Payment will be charged to iTunes Account at confirmation of purchase
● Subscription automatically renews unless auto-renew is turned off at least 24-hours before the end of the current period
● Account will be charged for renewal within 24-hours prior to the end of the current period, and identify the cost of the renewal
● Subscriptions may be managed by the user and auto-renewal may be turned off by going to the user's Account Settings after purchase